A PROTOCOL SIGNED FOR “HISTORY AND CULTURE OF YOZGAT” 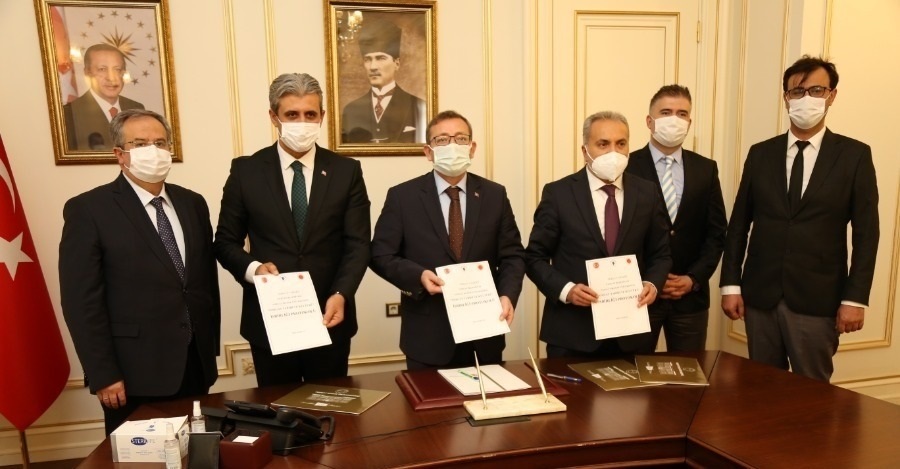 With the work to be done under the editorship of Yozgat Bozok University, Faculty of Arts and Sciences, Department of History member Assoc. Prof. Dr. Ebubekir Güngör, the history, culture, tourism values ​​and geographical beauties of the city will be published in a book.

"Yozgat History and Culture Cooperation" protocol has been signed between Yozgat Governorship, Yozgat Municipality and Yozgat Bozok University for the publication of the book.

Within the scope of the cooperation between Yozgat Governorship, Yozgat Municipality and Yozgat Bozok University for the writing and publication of a book on "History and Culture of Yozgat", it is aimed to write a joint work of three volumes named "History and Culture of Yozgat" in accordance with scientific criteria and it is aimed to be created within the scope of a social responsibility project that will contribute to the society.

Assoc. Prof. Dr. Ebubekir Güngör, the editor of the study who made a speech before the protocol signing ceremony stated that the work has started for the book in which the history, culture, art and religious aspects of Yozgat will be discussed. Güngör stated that the book, which will consist of 3 volumes, is planned to be completed in 18 months, and that each chapter will be compiled and written by our expert academic members.

Governor Polat explained that the book, which will consist of 3 volumes, will be made under the coordination of the university with the partnership of the governorship and our municipality and said: "We thought the preparation period of the book as 18 months, but hopefully we plan to complete it in a shorter time. We do not have a good source about the history and culture of Yozgat at the moment. We will create an international publication after an academic study in order to convey the history and culture of the city to future generations. We know that this book is a great effort to transfer the past of Yozgat to the future.

Yozgat Mayor Celal Köse stated that they are ready to give all kinds of support to the work to be prepared by Yozgat Bozok University regarding the history, culture and tradition of Yozgat.

Köse stated that at the end of the work, the work will shed light on the history of the city and its culture and that will be passed on to future generations.

Our Rector Prof. Dr. Ahmet Karadağ stated that he was excited and happy to respond to the expectations regarding Yozgat's history and culture.

"As a university, I would like to express that I am very pleased to take part in the scientific and historical stages of this work that will reveal the history of Yozgat. I hope that this work, which will be a great legacy to the future, will benefit all parts of our city and our country. I wish success to Ebubekir Güngör and his team in their work. The project, which will be implemented with the cooperation of three institutions, which are the dynamics of the city, will be beneficial to our country and our nation.

The Chairman of the Provincial Assembly, İskender Nazlı, Provincial Director of Culture and Tourism Hüseyin Çiftçi and Yozgat Bozok University Faculty of Arts and Sciences Department of History member and the editor of the study Assoc. Dr. Ebubekir Güngör also took part at the ceremony.